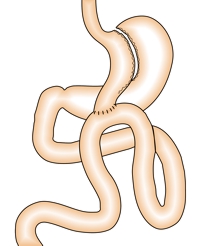 It was first described in 1997, and has become popular in Europe and Asia. It involves creating a sleeve-like stomach, and bypassing some of the bowel. But no stomach is discarded, and the bowel is connected as a loop, not a Y. The operation can be performed in a time slightly longer than the sleeve gastrectomy, and around 50 minutes less than the Roux Y operation.

There is some medium term data coming through which suggests that the minigastric bypass is associated with less weight regain and reflux than the sleeve gastrectomy, and weight loss results more similar to the Roux Y gastric bypass.

A study by Musella and others from Italy found new reflux in 2% of patients at 5 years , which compares with a number of studies of the Sleeve which showed 3 – 60%. Their leak rate was lower than sleeve leak rates. They found that ulcers occurred at the anastomosis in 1% - similar to the Roux Y.

Advantages of the Mini Gastric Bypass.

Stomach not thrown away as in the sleeve
Less reflux and probably less weight regain in the long term compared with the sleeve.
Surgery does not take as long as the Roux Y
Good weight loss results similar to the Roux Y
The risk of volvulus (twisting of the bowel) which can happen after Roux Y, does not seem to occur.